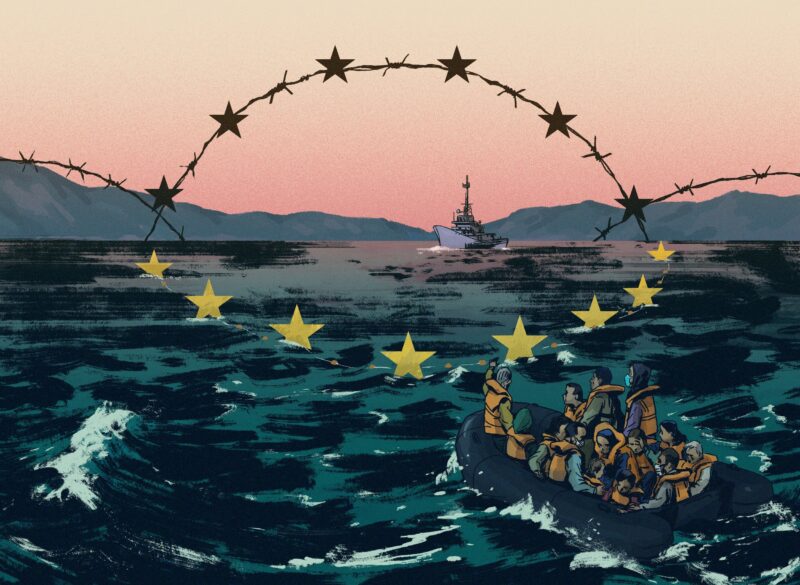 An investigation reveals how, in violation of international law, the Greek authorities coerced asylum seekers into pushing other immigrants back to Turkey over the river Evros in an organized system of push backs that, according to testimonies, routinely includes theft, violence and the violation of the rights of refugees.

Serious questions have been raised about Greece`s observance of the principles of the rule of law by the recent revelations of an international media investigation which shows how the Greek state has worked with traffickers to recruit immigrants into working for them to push back asylum seekers, in violation of international law.

The joint investigation by the Guardian, Lighthouse Reports, Le Monde, Der Spiegel, Reporters United and ARD Report München published testimonies from independent sources which reveals how immigrants are forced into work, in at least three police stations in Evros, participating in unlawfully pushing back asylum seekers to Turkey.

It is a well-organized system of pushbacks, in which the “slaves” (as they call themselves), under the supervision of the police, prepare boats to take refugees back to the opposite bank of the Evros. According to the allegations, the immigrants are often stripped, robbed and assaulted.

The investigation relies on testimony not only from six immigrants (who are now outside Greece  but from the beginning of 2020 “served” (unofficially) in the police stations of Neos Heimonios and Tycheros, on the border line of Evros, actively participating in push backs,) but also from three Greek police sources who not only confirm the practice of push backs, but reveal the operational details of the circuit that uses immigrants to push asylum seekers back to Turkey. These accounts are further corroborated by local residents who characterize this practice as an “open secret”, as they come into daily contact with these “slaves” who are used by the Greek authorities.

The fact that these reports involve at least three police stations and concern at least two years, and the push back of probably thousands of asylum seekers (given that on some nights the pushbacks involved more than 100 people,) would imply that the police and their political superiors were aware of the practice. In fact, according to one of the police sources who spoke on condition of anonymity, the assignment of “dirty work” to immigrants is known to both police officers and politicians, if not in its operational details, at least in principle.

In addition to the use of immigrants as “slaves,” the revelations indicate that the Greek authorities work with traffickers in Turkey and Evros to bring in migrants who are then forced to work for their crossing by participating in push backs.

A key point of convergence in the sources is the presence and actions of “Mike”. Mike (whose real name is known to the investigation) is from Homs, Syria. He has taken on the role of informal leader in the operations in Neo Cheimonio, acting as a mediator between police officers and the “slaves” who do the pushbacks, often recruiting them and accompanying them on operations. At least until the end of the investigation, the Syrian resided in a container next to the Neo Cheimonio police station, whilst reports implicate him in allegations of theft and violence against asylum seekers that were to be sent back to Turkey.

Mike and his brother, who is also involved in smuggling migrants, face multiple charges in Syria, including smuggling fuel and people. Mike, in fact, already has a conviction.

As a reward for their services, the “slave” immigrants receive a permit from the police, which allows them to stay in Greece for a short time, during which they try to cross into northern Europe.

These testimonies raise the issue of the violation of international law, as the push back, or refoulement, of refugees, according to the former President of the European Court of Human Rights (ECHR) Lino-Alexandre Siciliano, is prohibited by Article 33 of the 1951 Convention on the Status of Refugees, also known as the Geneva Convention.

Despite the seriousness of the reports, neither the police authorities nor the government commented when approached before publication.

In a state governed by the rule of law, the authorities must refrain from illegally repatriating refugees and migrants from their territory. Therefore, and in the context of international law, Greece must ensure effective international protection procedures, which will protect applicants from war, non-democratic regimes and other risks in their countries of origin.

Despite the above commitments, these reports, which were not refuted by the Greek government, lead to the conclusion that Greece is violating the Geneva Convention and refugee law.