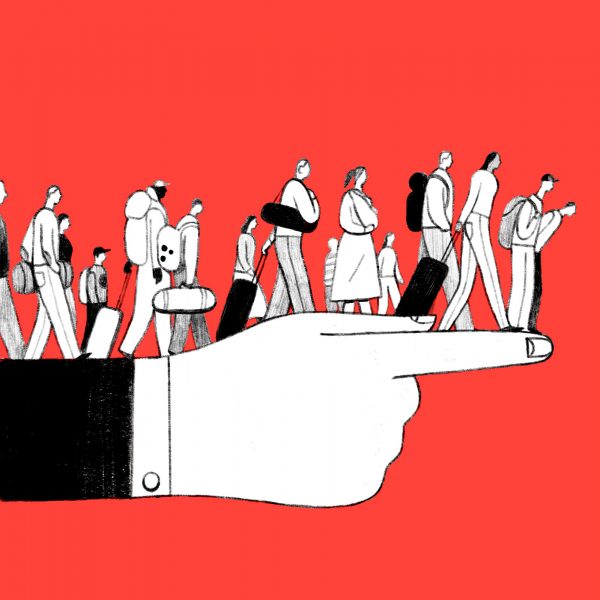 In February 2021, the recognized refugee R.K., a permanent resident of Rethymno, while visiting Thessaloniki was interrogated by the police, arbitrarily and illegally arrested and transported in a small, closed van with his compatriots and people of other nationalities to Evros, the Northern border of Greece, where he was forcibly expulsed, unofficially and illegally, to Turkey.

The refoulement of refugees to the maritime and land borders of a country  is a well known issue in public debate at the  national and European level. Accusations have been levelled about the extensive practice of refoulement, or unlawful returns without respect for formal procedures, in Northern Greece and especially in Thessaloniki. In February 2021, R.K., a Syrian national with recognized refugee status in Greece who has been a permanent resident of Rethymnon since 2016, was visiting a friend in Thessaloniki. During his stay there he was arrested, illegally so since he had recognized refugee status (even if he had just lost his residence permit), a fact that he stated in Greek to the police. They threatened him and drove him in a van to Evros, the Northern border of Greece, where he was forcibly expulsed together with other compatriots. During his stay in Turkey he contacted the Greek organisation HumanRights360 via email, where he asked for their legal assistance for his legal return to Greece as well as to file a complaint regarding his arbitrary arrest and his violent and illegal expulsion to Turkey.

A report was submitted to the Greek Ombudsman, and after the intervention of the Greek Consulate in Istanbul, and the receipt of his travel documents from Crete, he was able to enter the country legally again. At the moment, a preliminary administrative investigation is being carried out into the actions of the police officers and into the possibility of disciplinary penalties against any police officer involved.

“The competent authorities respect the principle of non-refoulement in accordance with the international obligations of the country.”

Article 33 of the Geneva Convention

Article 7 of the International Covenant on Civil and Political Rights: “No one shall be subjected to torture or to cruel, inhuman or degrading treatment or punishment. In particular, the submission of a person without his free consent to a medical or scientific experiment is prohibited.”

Article 3 of the New York International Convention against Torture. 1. No State Party shall deport, refoule or extradite a person to another State where there is good reason to believe that the person is in danger of being tortured.

Article 19 of the Charter of Fundamental Rights of the European Union. Protection in case of removal, deportation and extradition 1. Group deportations are prohibited. 2. No one shall be removed, deported or extradited to a State where there is a serious risk of being sentenced to death or subjected to torture or other inhuman or degrading treatment or punishment.

Article 5 paragraph 2 of the Constitution on the free development of personality and personal freedom. “All those who are in the Greek Territory enjoy the absolute protection of their life, honour and freedom, without distinction of nationality, race, language and religious or political beliefs. Exceptions are allowed in cases provided for by international law. The extradition of a foreigner for his actions in favour of freedom is prohibited… Personal freedom is inviolable. No one shall be prosecuted, arrested, imprisoned or otherwise restricted, except as provided by law.”

Additionally, according to the accusation of refoulement filed by Mr. R.K., Articles 3 (prohibition of torture), 5 (right to personal liberty and security) and Article 13 (right to a fair trial) of the ECHR were also violated.

In this case an individual with recognized refugee status who was a permanent resident of Greece was arbitrarily and illegally arrested and deported to Turkey without respect for formal procedures, in violation of both domestic law and international laws and conventions, as detailed in the main text.

HumanRights360
More
Submit a report if you have detected a violation of the rule of law!
SIGNED REPORT VIA DEDICATED FORM ON GOVWATCH
ANONYMOUS REPORT VIA GLOBALEAKS
Other reports in the same category